Andy Duncan had read the book, ‘The Bridge over the River Kwai’, and so knew how the story ended before he saw the film in 1959.

Of course, the climax cannot be revealed here. It is sufficient to say that it is a good one, packed with suspense.

The story of Colonel Nicholson and his bridge across the River Kwai can be recommended as interesting reading.

But for those who were not familiar with the story, the film review published in The Canberra Times in Feburary 1958 gave away a little too much:

The film was made in Ceylon, and the Ceylonese scenery is superb.

The story does condemn the futility of war, but it seemed a pity that most of the leading characters had to die.

Sessue Hayakawa is the commander, Colonel Saito. Throughout the tension and brutality which characterises the beginning of the film, and life in the Japanese prisoner of war camp, he yet compels the sympathy of the audience, especially in his feeling of failure. He, too, is killed in the closing scenes, before he had an opportunity to kill himself.

William Holden is good as the American, Shears, who makes a miraculous escape and yet is forced to return and dies as the bridge crumbles to destruction.

Was the art of the movie review so different in the 1950s? Or was the book so well-known? 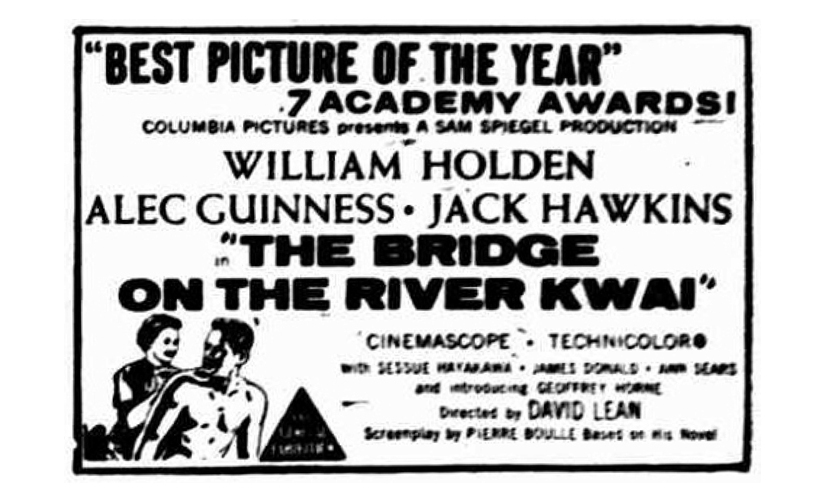 Andy was not a movie-goer. His routine was to walk to the Beaufort Mechanics Institute library and borrow a good book, perhaps an Agatha Christie mystery, and bring it home to read in his favourite armchair. This quiet escape into a book had become a habit when he served in India, and had helped sustain him as a Prisoner of War in Germany.

So it was quite unusual when Andy decided to go to the pictures. It was 1959 and he wanted to see ‘The Bridge on the River Kwai’.

The movie was showing at the Regent Theatre in Ballarat.

Travelling from Beaufort to see the movie took a bit of organising. Andy telephoned his grandson Robert in Ballarat and asked him to make the arrangements. As well as the seat reservations at the Regent, Robert needed to book tickets for the Beaufort-Ballarat train.

Robert took the train to Beaufort, stayed overnight at the Duncan home, then travelled back to Ballarat with his grandfather.

Their seats were in the dress circle, near the front and on the aisle, so that Andy could get up and move about, if need be. The film was over two and a half hours long, and Andy had not been in a cinema for at least twenty years.

It is a gripping war story of outstanding personal courage, and undoubtedly one of the outstanding films of the past year.

It is however, emotionally exhausting, reviving after more than a decade of peace the stark realities of jungle warfare.

Extract from The Canberra Times, 5 February 1958

Andy seemed a little shaken when he left the theatre. Perhaps it was partly because his first Technicolor cinema experience was overwhelming, but the film must have brought his own Prisoner of War memories to the surface.

He did not say much, except to admire Alec Guiness’ portrayal of the British colonel. This character, an officer who refuses to allow his officers to work even though it means solitary confinement and punishment, must have resonated with Andy, who had refused to work for the Germans in 1918.