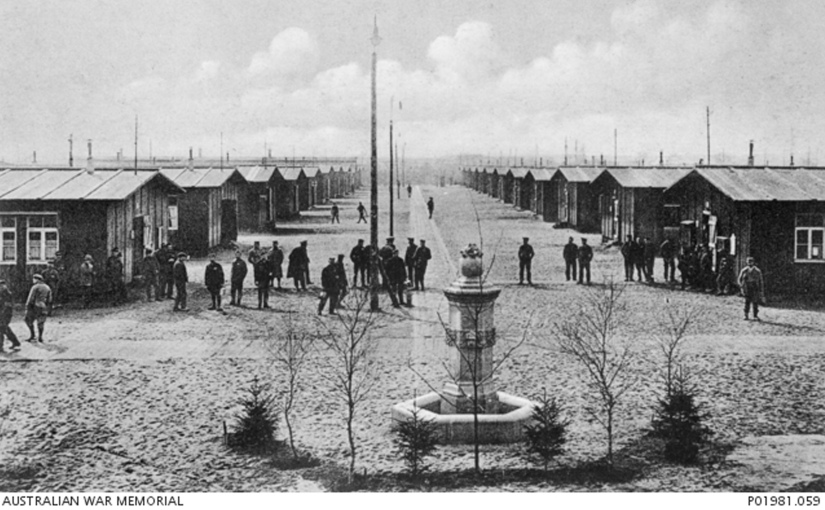 Towards the end of March 1918  Andy was moved from Courtrai to Dendermonde.

Here there were 280 of us in a room that could not properly accommodate 50. It was a frightful experience and we suffered it for 13 days.

He may have had a threadbare blanket, but no bedding and no place to sleep.

In early April the captured men were marched to the station to entrain for Germany.

Perhaps Andy’s trip into Germany followed a common transport route for POWs: to Brussels, through Liege, Aachen and Dusseldorf, before arriving at Dülmen camp. The journey took several days, the men crammed into cattle cars that bumped and shunted along. Every few hours the train would lurch into a station. At some stations they were able to leave the train and stretch their legs. At others they could only catch a glimpse of the town by pressing their faces to the ventilation grates.

During the journey the men might have received meagre rations of bread or barley water, or they might have attempted to barter parts of their uniform for food. Trading boots and braces could get a man half a loaf of bread.

Arriving at the Dülmen camp, Andy was finally processed as a prisoner of war. He lined up with the men to be counted. Some were asked if they were willing to work on farms or in factories. Andy seems to have refused. Under the Hague Convention officers and non-commissioned officers were not required to work, but with Germany suffering quite severely under the Allies’ naval blockade, and a shortage of working men at home, the country relied on POW labour. NCO prisoners were often ‘encouraged’ to volunteer through beatings and other ill treatment.

Following the head-count Andy was assigned to a NCO bunkhouse. After the suffocating confines at Dendermonde and the crowded train journey, a bunk with a blanket and a straw mattress must have been very welcome. Then Andy would have proceeded to the camp baths, had his hair clipped short and his clothes fumigated. Returning to his bunkhouse he probably took the first opportunity to write to Jane and let her know he was still alive.

The confirmation that Andy was a prisoner of war seems to have come a few weeks later in a postcard from another soldier to Jane. On 28 April his Statement of Service was noted “Now reported prisoner of war in German hands”, but his prison camp was not known. Until Andy’s whereabouts were established he would not receive Red Cross parcels. He would have to survive on camp rations and live in the clothes in which he was captured, probably lice-ridden despite the camp fumigation. He must have been desperately hungry.

No matter where men were, food meant little more than starvation rations. Typically, each man would receive a mug of ersatz coffee made from burnt barley or acorns, and a thin slice of black bread, adulterated with sawdust. At lunch he might have soup of varying quality, but generally it was little more than the water in which guards had boiled their own meals, with odd pieces of vegetable floating around.

from Prisoners of the Kaiser: The last POWs of the Great War by Richard Van Emden

One thought on “Prisoner of War”