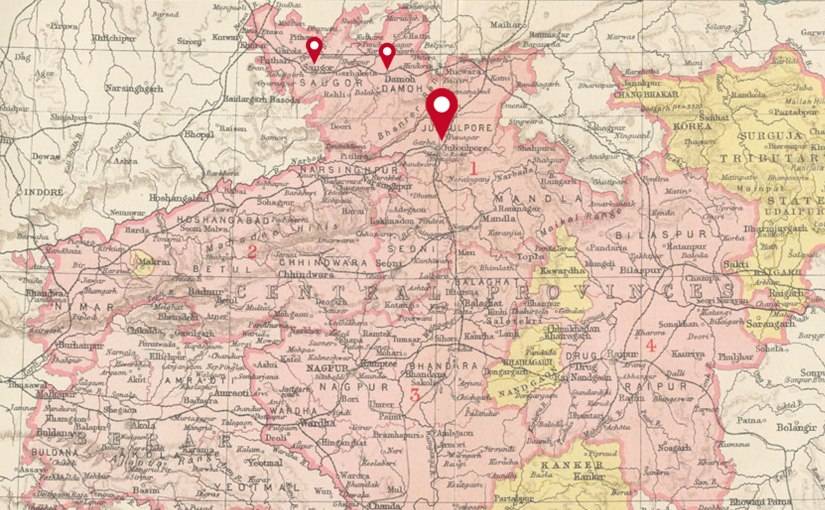 I wrote earlier of the South Lancashire Regiment’s time in India, starting with their garrison duty at Jubbulpore, Madhya Pradesh province.

While Andy Duncan studied for his sergeant’s exam and improved his woodworking skills, others found more unusual ways to pass the time.

A 1907 newspaper story caught my eye with its mention of the South Lancashires in Jubbulpore. It gives a colourful description of the landscape my great-grandfather would have known.

In India Lance-Corporal Atkinson recently walked 118 miles in 47 hours, thus breaking  a record made by one of the South Lancs. Regiment by 6 hours 35 minutes. The following is an account of his experiences as related (says ‘Health and Strength’) by himself: —

When my regiment relieved the South Lancs. Regiment at Jubbulpore [Jabalpur], the first thing I heard about was a record left by a private of that regiment, viz., walking to Sangor [Sagar] by way of the Black Forest, unaccompanied and unarmed, with the exception of a hunting-knife. I decided to attempt to beat this record.

I started on my journey at 5 p.m. on February 27, 1907, carrying 1lb muscatels, 1lb almonds, 12 cakes of chocolate, 30 biscuits, and a hunting-knife. I decided to get water wherever possible. At 5.15 p.m. on the 28th I was sixty miles on my journey. The native police stopped me, and I showed them my pass. They could understand the pass, but I could not make them understand why I should walk instead of ride. Thinking there must be something wrong, they arrested me, and confined me in the gaol. They treated me well, and I was quite a curiosity to the women and children, who seemed to think my manner of eating and washing were peculiar. Next morning at 5.45 the police awakened me, and at 10 a.m. I set out with one native as escort, and walked fifteen miles to a railway station. After I was handed over to the Civil police, and had explained my case to the chief inspector, the escort seemed very much upset at his mistake. The chief inspector promised to help me.

I set out again on March 5, 1907, at 5 a.m., taking passes in Hindu and Hurdu. Arriving at Singrampoor [Singrampur], 47 miles from Jubbulpore, I was advised by the khansarma (or proprietor) of the Dak Bungalow to stop, as otherwise I should reach the Black Forest by night. The danger of this forest lies in the panthers, which lie on the branches of trees and drop down on their victim as he, or it, passes underneath. To ensure safety the native mail carriers travel in pairs, and carry flaming torches and spears, on which are fixed a number of bells. After an hour’s rest I pushed on, deciding to take my chance. After walking a few miles I heard the report of a rifle, followed by a terrific roaring. Not knowing what it was, I climbed a tree. On the noise ceasing I cautiously descended, and was relieved to find that the noise was caused by large monkeys, of which there was innumerable quantities. About 10 miles in the forest I noticed a movement on a tree branch overhanging the path. Fortunately I stopped, and immediately a panther dropped down and disappeared in the jungle on the opposite side. Wild boars, buck, nilgai, etc., were very numerous. I have heard of the stillness of forests, but on this occasion all the animals seemed to unite their voices in one grand chorus, the whistling of beetles mingling with the howling of jackals and the shrieking of hyenas.

I arrived at a village in a small clearing, called Nehta, at 10.30 p.m., and a kindly native lending me half his scanty rags I slept until 1.30 a.m. I earned his undying gratitude by giving him four annas (4d). He did not appear to have possessed such a large sum before, and salaamed most humbly. Leaving the village, the forest resumed its natural aspect. I arrived at Damoh, half-way to my destination, at 5.30 a.m.

Resting here for two hours, I resumed my journey, and after travelling 22 miles I arrived at a river, and was delighted to have a swim. Crossing the river, I arrived at the village of Garakhota [Garhakota]. Close to here the King (when Prince of Wales) shot his first tiger. This is the end of the forest, and I was very pleased to leave it behind me. Walking as rapidly as possible in the awful heat, I was glad when the sun set and night closed in. About 13 miles from the end of my journey I came to a Dak Bungalow, and some soldiers on shooting pass insisted on my going in. After half-an hour’s rest I continued my journey, and reached Sangor at 2 a.m. My shoulders were blistered by the sun, and my feet in an awful condition through my march of 118 miles. With these exceptions I was in perfect condition, and suffered no ill effects.

When viewed through a 21st century lens this ripping yarn gives us a glimpse of the mores of British colonial rule.

It is a ‘boy’s own adventure’, taking place in the romantic world of the British Raj. India is a playground for the British. The wild beasts and jungles of the subcontinent are reduced to an exotic backdrop for a story that illustrates the resilience and determination of the British character.

Lance-Corporal Atkinson’s descriptions of the Indian people he encounters emphasise their ‘other-ness’: they don’t think like the soldier; they don’t understand his motives or behaviour.

It would be easy to go further and judge the colonial-era attitudes that permeate Atkinson’s tale. I prefer to focus on understanding the times and places in which my great-grandfather lived.

Featured image: Detail from map of Central Provinces and Berar. Jubbulpore is top centre, with Damoh and Saugor to the northwest. Source: The Imperial Gazetteer of India 1909. [ONLINE] Available at: http://commons.wikimedia.org. This image is in the public domain because its copyright has expired. This work is in the public domain in the United States because it was published (or registered with the U.S. Copyright Office) before January 1, 1923.