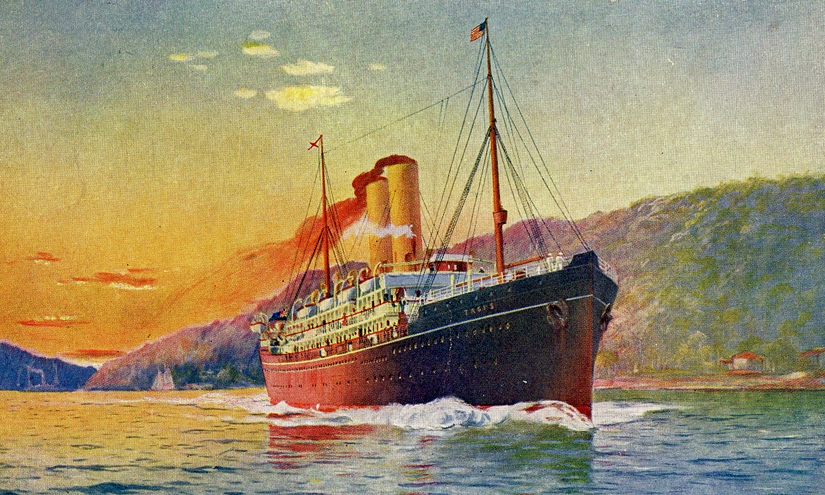 Andy joined the British Army in September 1899 as talk of war between Britain and the Boers reached fever pitch. The family story is that Andy lied about his age to enlist, and his attestation papers record his age as 18 years 1 month when really he was only 17. He was described as 5 feet 4¾ inches tall, with fresh complexion, blue eyes, brown hair.

Andy was not in the first South Lancashire contingent to sail for South Africa. On 30 November 1899 Andy would have joined the wildly enthusiastic crowds farewelling the South Lancashires as they marched out of the barracks. Andy was probably disappointed not to be going himself. Men were desperate not to miss out on an adventure that many thought would be over by Christmas.

Private Duncan finally departed for South Africa in early June 1900. It is likely that he sailed from Southampton on 8 June on board the newly-built RMS Tagus.

John Downham’s book, Red Roses on the Veldt: Lancashire Regiments in the Boer War, 1899-1902 helps to expand upon the terse entries in Andy’s service record.

The voyage to South Africa would have been new and exciting for young Andy. Dolphins leapt and raced alongside the ship as it sailed south, the waters alight with phosphorescence at night.

On board, the daily routine included cleaning the ship, physical drills and rifle practice. Men passed their off-duty hours playing cards or holding impromptu smoking concerts, at which each man was expected to sing or recite verse. Perhaps Andy recited the poems of Robbie Burns, which he was known for in later years.

The ship reached Table Bay on 29 June. It was a period of relative quiet in South Africa: large, formal military operations were all but over, the capitals of the two Boer republics were under British control, and some British observers were predicting the end of the war. But the Boer guerilla campaign was just beginning.

Andy travelled north from Cape Town to join the regiment in the southern Transvaal, where they were tasked with securing rail and telegraph lines between Standerton and Volksrust. Their duties included digging trenches to protect the camps, manning isolated outposts along the railways, and patrolling the lines. They kept a close eye on Boer farms in the area and conducted searches for arms. When ammunition or weapons were found, orders were to confiscate farm stock and burn the farm. The Boer commandos were never far away; the soldiers had to remain vigilant and ready to fend off raids on the camp.

On 4 September 1900 the battalion marched south-east as part of the 11th (Lancashire) Brigade. It was a 90-mile march through Wakkerstroom to Utrecht and on to Vryheid. Andy would likely have escorted guns and equipment carriages pulled by slow-moving oxen.

The march was dusty and dirty. Men’s feet blistered and bled. The weight of their rifles bruised their shoulders. Tents or shelters were rare and there was little opportunity to wash off the accumulated mud, blood and sweat. At the end of each day Andy would have slept in the dirt, his greatcoat wrapped around him as protection against the bitterly cold night.

The 1st Battalion took up garrison duty at De Jager’s Drift on the Buffalo River on 10 November. Here Andy spent an uneventful two months, though not far away at Vryheid the Boers mounted a serious attack that killed 11 men. The South Lancashires left De Jager’s Drift in January 1901 to relieve the Vryheid garrison. The 3 day march saw several brushes with the enemy but no serious fighting.

On 14 January the Battalion reached Vryheid and entered the garrison on Lancaster Hill, a high rocky plateau on the northern outskirts of the town. Andy would spend the rest of his time in South Africa stationed here. Once defences were strengthened and the threat of attack had died down, Andy would have settled into a routine of parades and drills, work parties and outpost or sentry duty.

Despite Vryheid being relatively peaceful throughout 1901, the South African weather and the British army staple diet of ration biscuit and bully beef continued to take a toll on the regiment. Of the thirty-five deaths in the South Lancashires while Andy was stationed at Lancaster Hill, twenty-one of them were from illness or disease. Another two deaths were caused directly by the elements: one due to sunstroke and one due to a lightning strike (which also injured eight others).

Andy fell ill with enteric (typhoid) fever on 14 November 1901. His condition was first reported as “dangerously ill”, but by 30 November he was considered to be out of danger.

My great-grandfather Andrew “Andy” Duncan was a soldier for a good part of his adult life. The military service that defined him to his wife and family was his enlistment as an original Anzac, but by 1914 Andy already had 12 years’ British Army experience in England, South Africa and India and a year in the South Australian Militia. The story of 17 year old Andy joining the army and travelling the world is seldom told and the details almost forgotten.

By piecing together war diaries, military histories, newspaper articles and family stories we can start to see the man with a love of empire and military tradition, a strong sense of civic duty and an independent streak that sometimes got him into trouble. While there are gaps in the story and questions that might never be answered, the 100th anniversary of the First World War seems a fitting time to tell Andy’s story.

Andy Duncan was born on 15 July 1882 in the family home at 9 Damside in Newton on Ayr, Scotland. He was the second son and the fourth of ten children born to John and Elizabeth Duncan (nee Stewart).

Andy’s world was working class, poor and built on coal. For generations the men of his mother’s family had been coal miners. His father had worked his way up from stoker to engine driver for the Glasgow and South Western Railway, operating locomotives between the Ayrshire collieries and the local industries hungry for coal.The local gasworks stood on the south side of Damside, the stink and soot from converting coal to gas a part of daily life.

Damside was a cobbled street of single-storey houses of brown-grey stone and thatched roofs. 9 Damside had been “Stewart’s Land” for several generations at least, and was the home of Mary Stewart, Elizabeth’s grandmother. Here the Duncans lodged along with Elizabeth’s sister Mary and her husband, engine driver William Cowan.

Between the two families there were nine children in the house when Andy was born. There would be sixteen children crammed around the Damside dinner table before the Duncans moved into their own home about 1890.

None of the Duncan children would take up work in the mines or on the railways. The industrialisation and urbanisation of Scotland opened up new and different employment opportunities, but did John and Elizabeth encourage their children to look away from the back-breaking and often dangerous work of their forebears?

Andy’s elder brother John worked as a boot finisher before moving to Clydebank to work as a machinist and driller for the Singer Manufacturing Company; his younger brothers Anthony and Hugh found apprenticeships as a baker and printer respectively.

Andy seems to have struck out on his own. By 1898 he had left Ayr for the booming port of Liverpool, where he worked as a labourer for a “Mr Stewart”. Was the Stewart name just a coincidence, or was there a connection with his mother’s family?

In 1899 when Andy attested for the South Lancashire Militia, his address was recorded as “Regin Street” Liverpool. Old maps of Liverpool don’t seem to include a Regin Street, but there is a Regent Street not far from the docks. Could Andy’s Scottish accent have been misheard by a Lancashire recruiting officer?